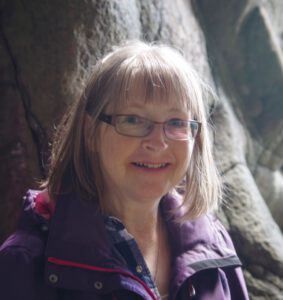 Carol McKay’s short fiction and poetry are widely published in literary magazines and anthologies. She was a finalist in the Macallan/Scotland on Sunday Short Story Competition in 2002 and an extract from her unpublished novel Incunabulum Notebooks was shortlisted in the Daily Telegraph Novel in a Year Competition in 2007*. She co-wrote As I Lay Me Down To Sleep, the autobiography of Eileen Munro, which was published by Mainstream Publishing in 2008. In 2010, Carol was awarded the Robert Louis Stevenson Fellowship which enabled her to spend a month at the Hôtel Chevillon artists’ retreat at Grez-sur-Loing, south of Paris. She was awarded a place on Magnetic North’s Space/Time residency in 2018. Her story In UK Now reached the finals of the Dinesh Allirajah Prize for Short Fiction, run by Comma Press and the University of Central Lancashire, in 2019. Carol taught and mentored in creative writing through The Open University from 2004 till 2018. You can visit her website here and read her blog here.

*Now published as Incunabulum in 2020.