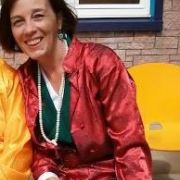 Jacqueline Smith completed the HNC Creative Project at the Glasgow College of Nautical Studies in 2008, the Steps New Writers Course at the Mitchell Library, Glasgow in 2009 and the MLitt-Creative Writing at Glasgow University in 2012. She has had various poems published in several Anthologies. Her ‘Muted Hellion’ collection was independently published in 2006 and a ballad in Scots, ‘Dumbie & the Devil’ based on the life of Scottish witchfinder Janet Douglas, was published in Long Poem Magazine, Issue 7, January 2012. She has completed her novel, The Witchfinder, also based on the life of Janet Douglas.  Jacqueline organized and hosted Poetry@The Ivory for eighteen months before being elected Chair of the Scottish Writers’ Centre based at the Centre for Contemporary Arts in Glasgow from June 2011 to Nov. 2012. She has been a qualified professional Homeopath, in private practice for sixteen years since graduating from The Scottish College of Homœopathy with Distinction in 1997, and is a member of the Alliance of Registered Homeopaths. She also paints and draws and has held several exhibitions of her work. The poet Alan MacGillivray said of Jacqueline’s Poetry@The Ivory events:

Jacqueline Smith planned, presented and inspired a series of poetry events in Glasgow that provided a valuable venue for both new and established poets to showcase their work before a growing audience of appreciative poetry-lovers.  Her choice of readers and the supporting materials and publicity ensured a stimulating programme that was maintained over several seasons.  She made a significant contribution to the Glasgow poetry scene.

The PotHole Press has published Jacqueline’s eBook, Inspiration From the Common Wealth of Writers to Boost Creativity which is now available on Amazon, Kobo and the Apple iBooks Stores.