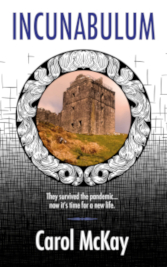 Incunabulum is written by Carol McKay.

The internet’s dead. The phone’s dead. Alice wakes from flu to find the world dead. Or is it?

Choosing a few special photos, she sets off in search of other survivors. Vulnerable Sara, whom she takes under her wing then lets down. The Gaffer, who fills her with disgust. Eric, affable, respectable, trustworthy. Junkie the slut. And Peej, the gaunt underclass anti-hero.

When tension ignites between Alice’s new community and the marauding ‘Bikers’, her refuge is destroyed and Peej is injured. To lie low, they go underground. Literally. But other things need resolving. There’s Alice’s drink habit. The mystery of the tiny face in her photograph. The disrobing of the real villain who damaged Sara.

And there’s one final battle if they want to survive. Incunabulum – epic storytelling about aftermath, birth and rebirth.

Did you know that Incunabulum started life back in 2007? The first chapter was published in The Telegraph when it reached the longlist of their ‘Novel in a Year’ competition, under the title ‘The Incunabulum Notebooks’. You can see it here.

Leela Soma interviewed Carol about Incunabulum for her blog, and you can read it here

Rona Fitzgerald included Incunabulum in her very interesting review of lockdown reading in The Blue Nib. Read what she said about it here.

To read some extra material about Incunabulum, and take part in the discussion, have a look at Goodreads

Incunabulum is available worldwide on Amazon as paperback and for the Kindle, from Amazon in the USA, UK, Canada, Australia or your country’s Amazon Store. It can also be downloaded from the iBooks store for all Apple devices. The paperback can also be ordered online at Waterstones.